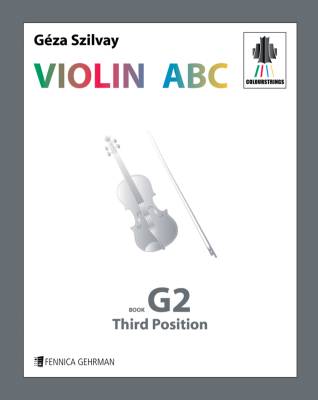 The volume G of the popular Colourstrings violin tutors by Géza Szilvay studies every position of the violin in a separate volume: G1 the second position, G2 the third position, G3 the fourth position, G4 the fifth position and the last one, G5, the high positions (sixth, seventh, eighth). These books form an all-embracing, rich collection of shifting exercises, position playing studies, excerpts from the literature, chamber music (mainly duos), and performing pieces, piano accompaniment offered as a separate publication (9790550116467). The extensive Book G2 - Third position (9790550115958) follows the key principles of Colourstrings methodology - the use of natural harmonics for instance - but it can be fully utilized also without any previous use or knowledge about the Colourstrings method. Have a look inside (click “index” and “sample”) and see the list of performance pieces below - a welcome enlargement in the syllabus. A separate collection, Colourstrings Violin ABC: Performing pieces for Violin in the First Three Positions (supplement for the book G2) (9790550116375), completes the carefully hand-picked repertoire from four centuries.