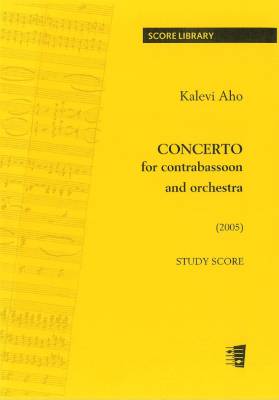 Recording by Lewis Lipnick & Bergen SO at Spotify

Kalevi Aho writes: "The Contrabassoon Concerto (2005) is the most monumental of my instrumental concertos - in essence it is almost a symphony for contrabassoon and orchestra. The work begins with a broad, contemplative monologue for the soloist in the instrument's lowest register. The opening melody is slightly reminiscent of the initial theme in my Fourth Symphony - Lewis Lipnick had told me that he was especially fond of that symphony. The broad first movement also contains some powerful orchestral climaxes. At the end of the movement, the opening contrabassoon melody is heard as cantabile bass line for the chorale-like and elegiac strings.

The second movement is a virtuosic Presto that exploits the contrabassoon's astonishing technical agility. The movement includes attractive solos for all the other woodwind instruments in the orchestra. The finale is once again slow, and includes the dynamic climax of the entire concerto. At the same time, the movement forms a synthesis of all the earlier melodic material. The ending fades away into the same type of mystical atmosphere in which the entire concerto began.

The first performance of the Contrabassoon Concerto took place in Bergen on 23rd February 2006. Lewis Lipnick was the soloist, and the Bergen Philharmonic Orchestra was conducted by Andrew Litton. I have dedicated the work to Lewis Lipnick."

The solo part is available separately (9790550096752). The orchestral material is available for hire from the publisher.