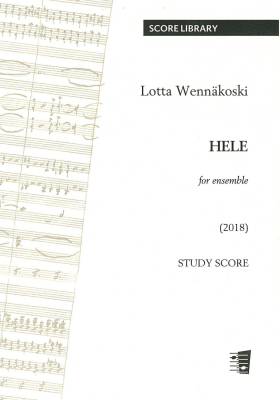 Lotta Wennäkoski wrote Hele (2018) for the musicians of the Los Angeles Philharmonic Orchestra. She tells about the process: “A composer works with sounds and time, but also with emotions and images. When starting a new score I usually try to find an "overall idea”, which can be anything from an atmosphere to a phenomenon of any kind. In Hele it has been the title which has more or less provided the starting point and guided the compositional process of the work. Hele is Finnish for a grace note - thus a very specific expression. It is also very close to a word meaning bright and light as well. The third aspect the title has suggested for the music is the rhythmical motive it contains - that of two short note values.”

Hele is scored for 12 musicians, with some doubling in unusual orchestral instruments like toy bird whistles. The duration is circa 13 minutes and the orchestral parts are available for hire from the publisher.