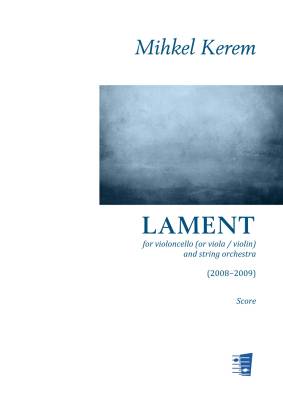 "Anyone who believes traditional tonality to be no longer capable of expressing anything more than timeworn clichés should listen to Kerem's work.” (Robert Maxham / Fanfare)

Lament for violoncello and strings was written as a commission from Camerata Nordica and its principal cello, Per Nyström, in 2008. At Per's request the solo part in this piece was composed to represent a lone human voice in a world of disappointment. The composer tells: “I used the violins and violas as an operatic choir: they support and comment on the lament of the lone human being. The bass line is one long drone throughout the piece, representing destiny or unwanted reality. It disappears only when the solo voice with the chorus of violins and violas intensifies in their disagreement with life. At the climax of the piece the solo voice is momentarily swallowed by the chorus, only to return with an angry statement of the opening phrase. Thereafter the chorus calms down in acceptance that the world won't change. The bass drone returns to haunt the dying lament of the lone voice. The very last phrase is the only one in a major key and echoes as a prayer for hope.”