Overture to the play Cobblers on the Heath by A. Kivi (PDF) - Score — Alkusoitto A. Kiven näytelmään Nummisuutarit (PDF) - Partituuri 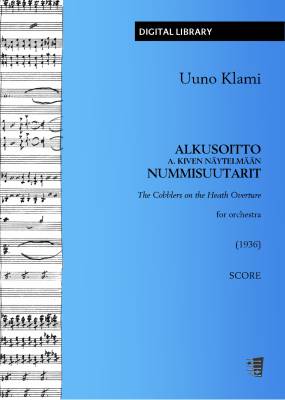 Uuno Klami (1900-1961) became one of the leading Finnish Modernists during the 1920s. His main genre was orchestral music, and he experimented widely with his orchestration, combining national themes with international trends. His studies took him to Paris and Vienna, and Parisian influences are particularly marked in his musical language. He admired the orchestral sound of Ravel and was also influenced by Stravinsky.

Klami is one of the most frequent names on the Finnish concert programme, with his Kalevala Suite, Sea Pictures and other orchestral works. He also wrote popular overtures, such as those to King Lear and The Cobblers on the Heath, the latter virtually having the last word on the use of humour in this genre.