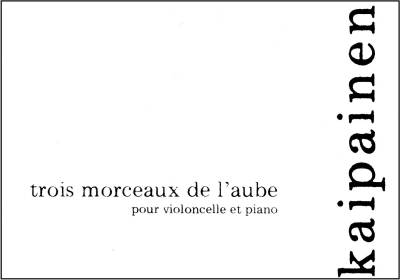 Trois morceaux de l'aube is essentially a simple composition. It is made up of three rather similar atmosphere-pieces, which may, or then again may not take the shape of variations on a theme of form and content. Hence the piece has the subtitle ‘Variations on a Dadaistic idea of form', and Dadaism here is to be understood as the tendency, desire, or need to join unconnected phenomena, by forse if necessary.

The three parts of the work have all been given names referring us to various dawn and morning moments. The first, Après minuit, is a dream-picture. The Mahler citation in the early stages is there to stress separation from the waking world, in the same way that the Wagner quote towards the end hopes to bring to mind impressions of a return to consciousness. In between these two, the interlocking musical streams represent the world of one who has happily shrugged off the waking state.

The second part, Mirage, is a shade more complex. It links a mixture of tones, on the one hand associated with the mirage of the title, eyes screwed against the light, even slightly oppressive in feel, and on the other hand profiled rhythmic impressions, which could be described as cubist figurelets, and the two would like to behave in a way characteristic to the American ‘minimal music', but to their great annoyance do not succeed in finding mutual compatibility. The central part of Mirage is indeed reminiscent of a box in a child's bedroom, in which the pieces of several different jigsaw puzzles have become jumbled up.

The third part is called Avant midi. As the title suggests, the piece is concerned with the inevitability with which the daily routine creeps into and ultimately takes over completely the thoughts of an average person on any average day, as the clock ticks toward lunchtime. Finally the machine-like situation is also linked with outside associations: on the one hand beautiful, productive harmonic sounds, and on the other perhaps irony, a shade sarcastic.

But in the final analysis, perhaps such an interpretation is uncalled-for. Trois morceaux de l'aube is, outwardly at least, three pieces for cello and piano.